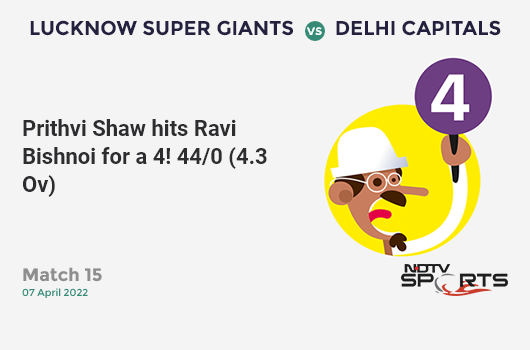 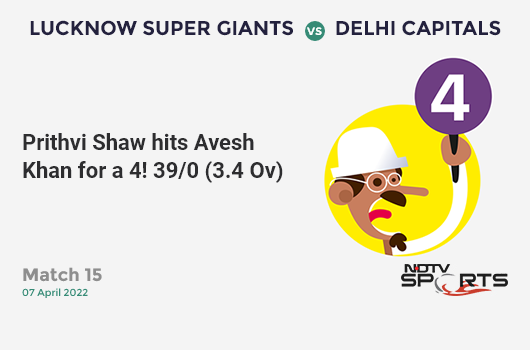 3.3 overs (4 Runs) FOUR! Top placement! A length ball, just outside off. Prithvi Shaw hangs back and punches it through point for another boundary. 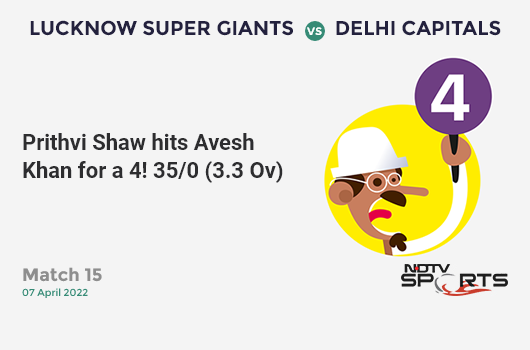 3.2 overs (4 Runs) FOUR! Prithvi Shaw not here to sit back! Short ball, outside off. Prithvi Shaw latches onto it and cuts it hard over covers for a boundary. 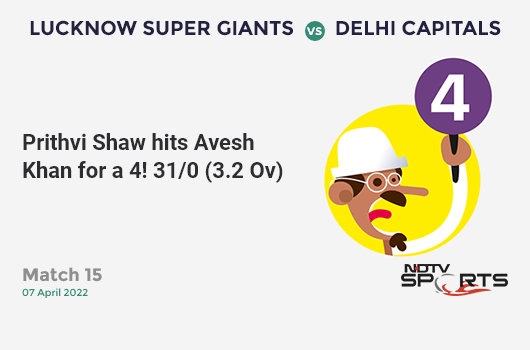 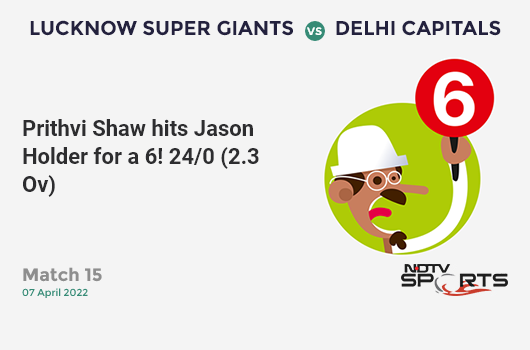 2.2 overs (4 Runs) FOUR! This is incredible. Back of a length, on off. Prithvi Shaw comes down the track and hoicks it through mid-wicket for a boundary. 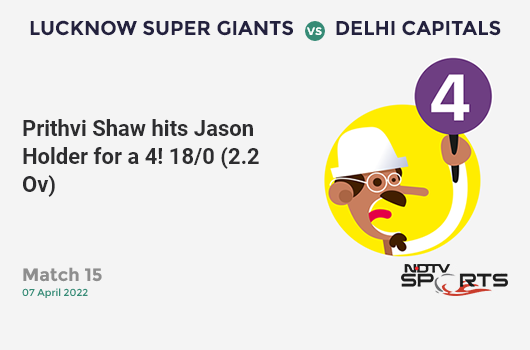 2.1 overs (1 Run) Full length, wide outside off. David Warner this time takes the aerial route, as he slashes hard at it. The ball lands safely outside the inner circle. The batters cross for a single.
1.6 overs (0 Run) Floated, full and outside off. Prithvi Shaw looks to hammer it away but only manages to connect with thin air.
1.5 overs (4 Runs) FOUR! EDGY! This is very reckless. It is short, outside off. Prithvi Shaw throws the kitchen sink at it. The ball takes the outside edge and goes over Jason Holder at first slip like a bullet. Prithvi Shaw gets another boundary but this time at third man. 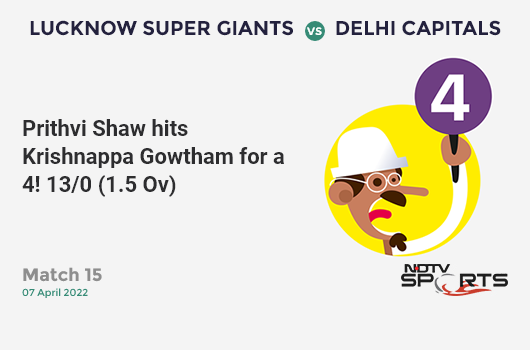 1.4 overs (0 Run) On off, defended out solidly.
1.3 overs (4 Runs) FOUR! Prithvi Shaw gets the first boundary of the innings. Tossed up, full and outside off. Prithvi Shaw slashes at it, lofts it over covers and bags a boundary. This is the Shaw that everyone knows. 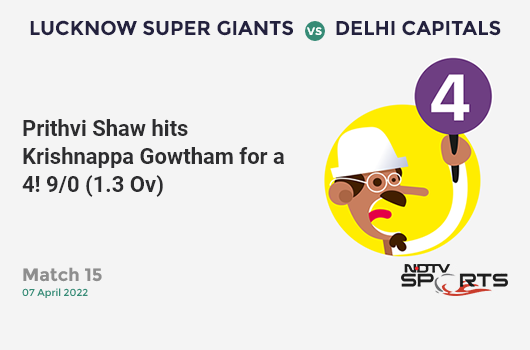 1.2 overs (1 Run) On the pads, David Warner clips it to deep square leg for a single.
1.1 overs (0 Run) Fuller, on off, skidds through. David Warner stays back and flicks it to mid-wicket.
Who will bowl from the other end? Krishnappa Gowtham it is.
0.6 over (0 Run) Two dots on the trot to end the over! It is short, on middle and leg. Prithvi Shaw mistimes his pull to mid-wicket and it nearly carries to the man stationed there. He gets lucky this time. A good start by Jason Holder.
0.5 over (0 Run) Length ball, outside off. Shaw guides it towards backward point.
0.4 over (1 Run) ‘Yeah, yeah’, David says and gets off the mark this time. Back of a length, on the bodyline. David Warner tucks it to square leg off his hips and gets across for a quick run.
0.3 over (0 Run) Length ball, angled across the left-hander. David Warner stays back and blocks it out solidly. Yet again he is vocal about not taking the single immediately.
0.2 over (0 Run) Length ball, outside off. David Warner pushes it firmly to mid off and yells NO for a run.
0.1 over (3 Runs) An incredible effort by Andrew Tye to save a run for his side! Jason Holder starts with a full ball, on the pads. Prithvi Shaw flicks it gently through the gap at mid-wicket. The batters run three.
We are set for the game to begin! The players of Lucknow are in a huddle before they stride out to the middle. David Warner and Prithvi Shaw walk out to bat for Delhi. Jason Holder will start proceedings with the ball. Here we go…
Prithvi Shaw is in for a chat. He says, he is not exactly happy with his performance but mentions the process has been really good for him and he is able to strike the ball really well. Adds, Ponting is like the boss of the side, he sets up a target for each player. Adds, he always shares his experiences of his playing days and says the youngsters are learning a lot with his help. Adds, in the last two games, they lost too many wickets inside the Powerplay and they would hope to improve in that sector. Praises the bowlers for their exceptional effort and also speaks positively about the lower middle-order putting the foot on the gas.
Rishabh Pant, the skipper of Delhi, says that they would have bowled first. Adds that they have three changes to their side. Tells that David Warner brings a lot of experience to the side and they are very excited.
KL Rahul, the skipper of Lucknow, says they will bowl first. Says he can’t really think of a reason for bowling first. It is a fresh wicket. He hopes they can apply some pressure. Mentions, Manish Pandey misses out and Krishnappa Gowtham comes in. Adds, it is just the beginning of the season and everyone is pumped to make an impact on the field.
Delhi (Playing XI) – Prithvi Shaw, David Warner (In for Tim Seifert), Sarfaraz Khan (In for Mandeep Singh), Rishabh Pant (C/WK), Rovman Powell, Lalit Yadav, Axar Patel, Shardul Thakur, Kuldeep Yadav, Mustafizur Rahman, Anrich Nortje (In for Khaleel Ahmed).
Lucknow (Playing XI) – KL Rahul (C), Quinton de Kock (WK), Evin Lewis, Deepak Hooda, Ayush Badoni, Krishnappa Gowtham (In for Manish Pandey), Jason Holder, Krunal Pandya, Andrew Tye, Avesh Khan, Ravi Bishnoi.
TOSS – Lucknow has won the toss and they have elected to BOWL first.
PITCH REPORT – Graeme Swann is near the pitch. He says that the wicket looks pretty good with some grass present evenly. The spinners will look to bowl very straight lines around off and outside off. The first innings average score should be somewhere around 180. Both batters and bowlers will have a good outing.
Lucknow seems to have some great batting depth, with the top-order and middle-order able to be more expansive in their batting. Their batting depth is just incredible. While Delhi have a great mix of bowlers at their disposal, and would really need their middle-order to hit the ground running. We are heard that Marcus Stoinis could be back in contention to start for Lucknow. Nonetheless, Delhi have Warner and Nortje available for selection as well. Who will gain the bragging rights? We shall find out soon. Stay tuned for toss and team updates.
Hello and a warm welcome to game number 15 of the Indian T20 League. In this match, Lucknow will clash against Delhi. This is the first encounter amongst the two sides. With momentum on Lucknow’s side, it will be interesting to see how Delhi, the experienced campaigners fare against a side that is showing greater ambitions.
… Match Day …
Advertisement